How to Make the Best Cup of Coffee, Ever 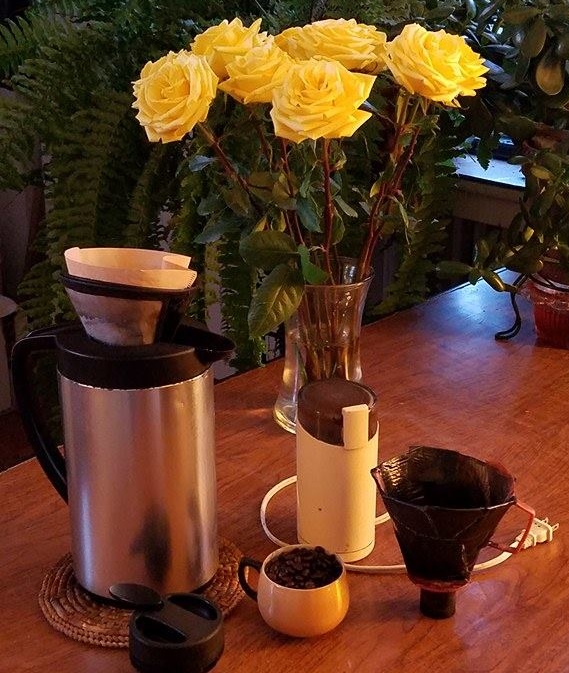 When a former husband and I traveled through the Midwest in the 1990s, he always packed a small jar of Medaglia d’Oro instant coffee to spoon into what he called “three-button coffee,” so weak that when a waitress approached (“Care for a refill today?”) you could count the buttons on her uniform through the coffee pot. Now we have a choice; baristas are everywhere. North Americans have finally caught up with the rest of the world and learned to drink a decent cup of coffee.

However, when it comes to coffee excellence, strength is not the only requirement. Like many of life’s simple pleasures, simple is not always easy, which is why, in all modesty, I am sharing with you some secrets I have learned about making a superlative cup of coffee:

THE BEANS.  I have a friend in Pennsylvania who roasts his own coffee beans in his garage. I would do the same, if I had a garage, but instead I have a neighborhood coffee emporium that often has a line of customers out the door, so their beans are always freshly roasted. (The same can’t be said for the ubiquitous corporate brand that shall remain nameless.) I also like to make my own blend of roast: two pounds of Italian espresso to one pound of French mocha. Be sure to order it “in the bean,” because grinding must happen just moments before brewing.

THE WATER. I am lucky. I live in New York City, where the tap water is so nice we call it “Catskill Reserve.” If your local water is less than desirable, I recommend bottled spring water for brewing coffee.

THE MEASURING. If perfection every time is the goal, one must measure. My preference is two cups of water to a heaping 1/3 cup of beans, which I grind until a guest screams “Stop!”

THE TEMPERATURE. Here comes the breaking news: All home coffee-making machines–all–are terrible because there’s no way the water that starts dripping seconds after you push the “on” button has already reached a full boil. As for those large glass drip makers, by the time the water has filtered through the beans into the pot, the coffee is already lukewarm and must be reheated. Horrible! The only way I have found to avoid this problem is by brewing directly into a carafe. But how? Many years ago I found a plastic funnel (see photo) with a neck long enough to fit securely into the mouth of a carafe. Because coffee acid eats plastic, it’s now heavily duct-taped because I’ve never been able to find a replacement, and although people make jokes about it, I don’t mind. To me, it’s priceless. Fortunately, there is an alternative in the metal mesh coffee funnel that commonly holds paper filters (I use both). Unfortunately, it has no stabilizing neck, so you need to pour the boiling water into it slowly and with care. A small price to pay for a perfect cup of joe.

THE HALF-AND-HALF. Perhaps not for everyone, but for me, waking up with the knowledge that there’s a quart of it in the fridge makes a perfect beginning to my day, no matter what happens thereafter.