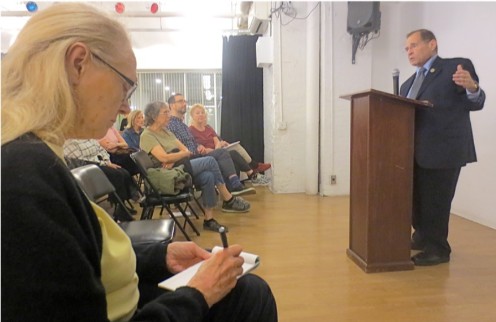 Republicans are very afraid of my congressman, Jerrold Nadler. Aside from his being the ranking Democrat on the Judiciary Committee of the House of Representatives, with jurisdiction over the Department of Justice, the FBI, the courts, immigration, and the Constitution, what is it about this mild-mannered man that makes him such a threat? “He’s under the radar,” warns an alarmed voter.  “He’s much more low-key than Democrats like Chuck Schumer who are in love with the media. He must be kept away from the levers of power!” It’s true that Nadler’s style is low-key, but he’s no longer under the radar. At recent televised committee hearings he repeatedly confronted Republican members who were hell-bent on doing outrageous things like leaking information to the White House, but his protests were without anger, insults, or an attack of the vapors. “If you lose, you give them hell,” he says, “but they’re not enemies.”

For 26 years Nadler had represented the Tenth Congressional District, which covers Manhattan’s West Side, hasn’t sent a Republican to the House in a hundred years. When Nadler addressed his constituents in the Westbeth Community Room last month, he told us  that in the 2016 House race he won 214 of the 218 votes cast in the all-Westbeth 20th E.D. No wonder the meeting was more like a friendly gathering of the like-minded than the usual please-won’t-you-vote-for-me campaign. Along with the atmosphere of goodwill, however, Nadler delivered one sobering message after another: voter suppression, Republican ramrodding of the Kavanaugh Supreme Court confirmation hearings, their attacks on the FBI and other government officials, an urgent need to protect the Mueller investigation, the president’s politicizing of the Justice Department, and other “very dangerous things we never thought would happen. Our democracy is hanging by a thread. That’s where we are now.”

But nothing he said that night could have prepared us for the multiple assaults on humanity that October would bring: the Kavanaugh confirmation, endangering hard-won human rights for decades to come. Massive voter purges. The murder of Jamal Khashoggi. His alleged murderers’ investigation of themselves with Trump’s blessing. His fomenting of fear, anger, and violence at multiple rallies. Body slamming. Body doubles. Boofing. Brown shirts brawling on the Upper East Side. Denial of voting rights to indigenous people who lack numerical proof of where they’ve been living for thousands of years. Little children in concentration camps still crying for their parents. And then, just when we thought we couldn’t take any more heartbreaking news, the horrific events of last week.

What is happening to our country? What can we do to stop this slide into dystopia? In the words of Jerry Nadler, “For now, our only redress of grievances is at the polls.” If the Democrats take back the House in seven days, the powers of the subpoena and the gavel will be transferred to the ranking Democrats of 27 committees, ousting some of the most venal Republicans chairs: Jim Jordan, Mark Meadows, Ron DeSantis, and Devin Nunes, to name a few. And the chair of the all-powerful Judiciary Committee will be Jerry Nadler, loaded for bear.

Here is a rousing final message from “the conscience of the House,” as Nadler is called by his fellow legislators: “I’ve personally fought Trump many times, and even without the powers of the presidency he was a ruthless and dangerous man. Elected officials must wage fierce battles against every regressive action he takes, so we must have sustained and loud voices at our backs. We must refuse to allow the normalization of Trump”

See you at the polls.