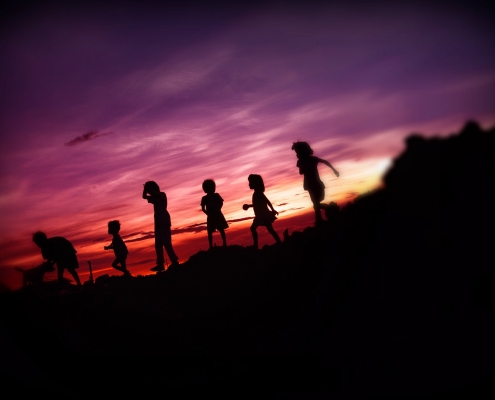 “Kirstjen Nielsen is no woman!” said my friend, raising his voice above my ranting over the current crop of Evil Women in Power, whose assault on human dignity has been putting me in a tailspin since the curse of Jeane Kirkpatrick in the early 1980s.

“Those who would protect life are not defined by gender but by what they value,” he said, “and if they don’t value life, then in my opinion they’re not women.” Thanks to his eye-opening statement, this message is not about gender. It’s about women in power who dehumanize themselves by emulating the worst of what men in power have done since time immemorial.

The late Jeane Kirkpatrick has been on my mind these days because my heart is breaking over the refugee families fleeing El Salvador, Guatemala, and the current most dangerous country in the world, Honduras. Kirkpatrick was ambassador to the U.N. during the Reagan administration, which provided generous financial support to the ruling military juntas of these countries while they went on a killing spree, slaughtering thousands of Central America’s poorest of the poor. The damage was so great that these countries have yet to recover.

Although this brutal history has been a taboo subject ever since, the names of the victims are embedded in my memory–Archbishop Oscar Romero, murdered at his altar, the massacre of entire village of Mosote, the near genocide of the Ixiles tribe of the Mayan–as are the names of the perpetrators and their enablers–Roberto D’Aubuisson, Rios Montt, Samosa, Duarte, and, yes, the now saintly Reagan. Most likely Ambassador Kirkpatrick didn’t order any of these atrocities, but she was an expert at employing the lethal weaponry of words. Some of these regimes, she said, were “totalitarian” (i.e., communist: bad) while others were merely “authoritarian” (i.e., friends: as long as you let us pillage the rich resources of your country).

Back then I wrote a poem about her, which I have pulled from my files for this post because she seems to have risen from the grave, zombie style, under a multiple of names–Kirstjen Nielsen, Victoria Toensing, Sarah Huckabee-Sanders, Laura Ingram, Karen Handle, Janine Pirro, Kelly Ann Conway, Ivanka, Melania , and that venal queen of mean–Ann Coulter. I dedicate the following poem to the lot of you. May history bestow upon you the infamy you so richly deserve.

I have a maid.
Her name is Esperanza.
She’s not uppity like the other one
who gave me lip about compensation.
Esperanza loves her job
and her little gingham room
deep within my privacy
behind high walls that protect me from the guerilleros.

In the morning Esperanza flits among my sunny rooms
dusting my treasures,
wearing the garish parrot costume
and the bangles,
twittering her sad song.
Her eyes are dark and rich
the way like my coffee, which she serves me steaming
with a pain au chocolate.
How discreetly she averts her eyes
from my  morning general (the darling D’aubuisson)
without a hint of squeam, another virture.

And didn’t I give her the Googie blouse?
Stained, how embarrassing.
I perspire so before the cameras
under the Georgetown suit.
Oh, the great pressure of my job,
improvising excuses for the naughty boys,
finding just the tidy phrase (Authoritarian–Totalitarian)
to mask the necessary horror.

The clock strikes!
Oh the weight of these, the helpless
upon me and my masters all!
Great Daddy, I will lend you my degree, my cultured accent
and my curried favor if you will but steel me against her eyes
and that sad song,
the one with her name in it,
and bring me sleep.
Almighty Daddy, though I rub and rub
the stain will not come out.
The cup will not pass.
Oh deliver me from this, my great authority.

To bed now.
And yet, I know
that if the doorbell rings
I won’t have to answer.