We Are All Indigenous 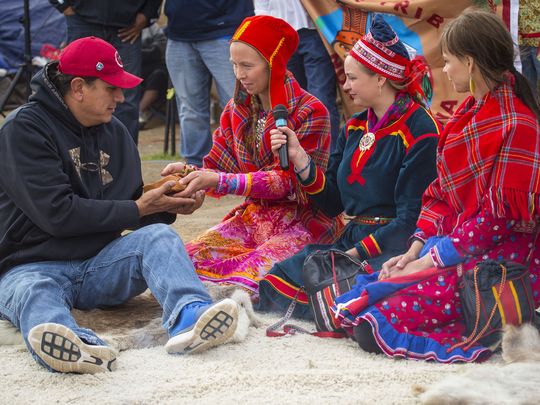 Until recently I had always assumed that I was 100 percent Norwegian. Although my family tree has been researched back six generations to 17th century Norway, my interests went much deeper than a mere 400 years ago. I knew that DNA researchers could tell me about that deep history. For decades they had been collecting the genetic profiles of people from around the world and comparing them to the DNA of ancient remains. Their findings are now widely accepted–that everyone alive today can trace their lineage back to a founding member who lived in Africa. It was time to swab the inside of my cheeks, send off a DNA sample, and finally get some answers to the question that had intrigued me for so long: How, when, and why did my African ancestors end up in Ultima Thule, the northernmost habitable land on the planet?

This month I got those answers, and they’re pretty amazing. First, the “when”: I belong to Haplogroup U, the founding population of Western Europe that left Africa around 47,000 years ago. My subgroup, U5, arrived in the Scandinavian high latitudes around 35,000 years ago. Now, here’s where it really gets interesting: Haplogroup U5 also has a subgroup, U5b1b1, which is so prevalent among the Sami of Scandinavia that it is called the “Sami motif.”

The Sami are the only indigenous people of Europe who have maintained their culture. They are also the genetic founders of Ultima Thule, but like all Ice Age hunter-gather populations, they traveled vast distances following their food supply during times of extreme climate change. In a rare burst of emotion, one geneticist writes, “Most surprisingly, this very rare Sami motif is also present in high numbers among the Berbers of North Africa.” (Which explains another surprising aspect of my genetic profile–that I am only 25 percent Norwegian. There were no Norwegians then, no countries of origin, only hungry people on the roam.)

For hundreds of generations the Sami intermarried with other Nordic peoples. There is scarcely a Norwegian alive today who doesn’t share their ancestry. They also played an important role in Scandinavian culture. They had special skills, like reindeer husbandry, that made some of them wealthy. Sami hunters, artists, and traders supplied the elite with luxury goods–rare furs, falcons, eiderdown, exquisite jewelry. Troubled people sought them out for their spiritual and healing powers. They invented skiing, “women and children sailing like the wind.” For all these reasons and more, the Sami were held in high regard.

That ended with the advent of Christianity. The rest of Sami history is similar to the suppression experienced by other indigenous cultures that refused to give up their ways. The destruction of Sami sacred drums was so complete that today they can be found only in museums. It was not until the 1970s that these prohibitions were lifted, but since then the Sami have been reclaiming their culture. Their language is taught at Sami universities. They are also global activists. Last September they sent a delegation to support the water protectors at Standing Rock. They’re on the rise.

The most meaningful thing I have learned from studying my DNA results is this: Go back far enough and we are all indigenous. We just got disconnected. It’s time, for me, to reconnect.