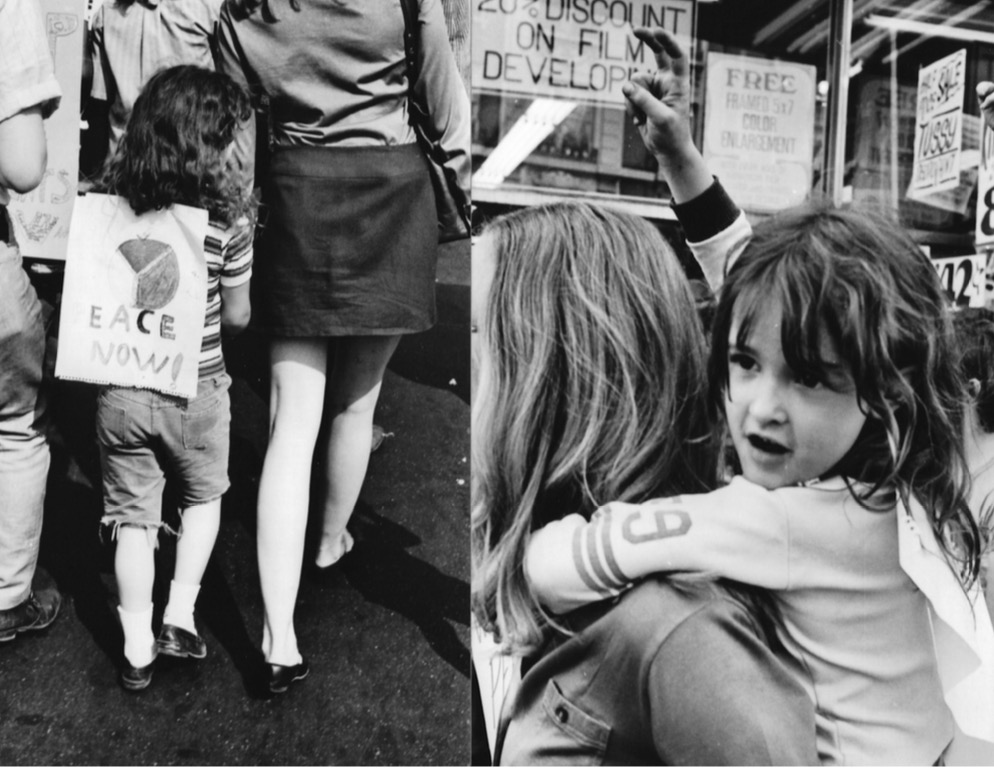 Photo credit: Phil Rothenberger. Daughters Shannon (marching) and Stephanie (on my back). Protesting the massacres at Kent State, May 1970

In the sixties and seventies, the last time masses of people addressed their grievances in the streets, we took down two presidents, stopped a war, and forced Congress to pass civil rights and voting rights acts as well as curb (for a time) the powers of the CIA and the FBI. These achievements would never have happened without strong, courageous, and committed grass-roots movements, but they took decades. We don’t have that kind of time now. The stakes are too high.

So what do we do, as citizen of a nation whose newly installed leaders have suddenly and dangerously gone rogue, threatening to gut everything we hold dear–all the social and political progress we’ve made in the past hundred years? Although I have friends who dislike street protests because they inconvenience people, I disagree. They must continue, because they work. But they’re not enough this time. Here are some other ways to effect nonviolent resistance.

Boycotts: At grabyourwallet.org is a long list of companies, from Amazon to Zappo’s, that market Trump family products or are run by CEOs who actively support the new regime’s far-right agenda. Another, leftoverrights.com, lists brands that advertise on Celebrity Apprentice, still a source of Trump income. Be sure to tell these companies why you’re no longer doing business with them.

Divestment: Lest we forget, a worldwide boycott of South Africa brought down apartheid. divestinvest.org is a global movement, “the fastest growing divestment in history,” with a focus on withdrawing funds from the fossil fuel industry. Amalgamated Bank is the first in the U.S. to divest. Other groups are #BankExit and #defundDAPL. And this just in! The City of Seattle has divested from Wells Fargo Bank–a $3 billion blow. Fight on.

Letters and phone calls. Officials ignore Internet petitions, we’re told, but they do pay attention to mailbags full of letters in their office. Write to them on a regular basis. If the White House public contact number remains down, there’s a lovely list of alternative White House numbers at http://gothamist.com/2017/1/31.

Find a local group of resisters: See https://indivisibleguide.com, A Practical Guide for Resisting the Trump Agenda, and #resistTrumpTuesdays on social media.

Support: Planned Parenthood, the American Civil Liberties Union (ALCU), Citizens for Responsibility and Ethics in Washington (CREW), Justice Democrats, https://justicedemocrats.com, (“save the soul of the party,”) and many more groups on the front lines of this resistance movement. Make it painless by scheduling a monthly deduction from your online bank account. You’ll hardly notice the impact, but the cause will.

Now for some encouraging news, from an article about how civil resistance works in the February 2 issue of the online Guardian: “Historically, dictators topple when as little as 3.5 percent of a population is engaged in sustained nonviolent resistance.” We can do this. We must, so that the children of our grandchildren can enjoy a livable world.