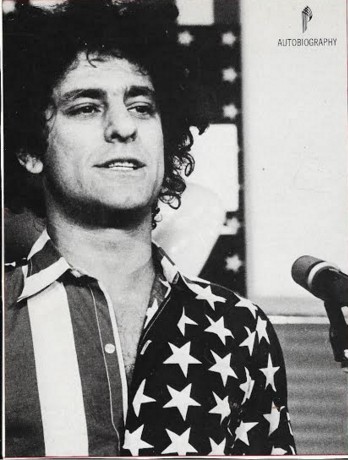 First, a correction: My only copy of Soon to Be a Major Motion Picture disappeared long ago, so I had to rely on what turned out to be my faulty memory about Abbie’s talk show appearance in the February blog. Fortunately, I went to my ghostwriting archives before writing this installment. Of the two thick folders labeled “Abbie,” one of them was an early draft of the manuscript, and it set the record straight about what happened when he went on the Merv Griffin Show. His offense was not about releasing a dove that disgraced itself. It was about the American flag shirt he was wearing (see photo), a replica of the one the D.C. police ripped off him in 1971 after breaking his nose. Although the shirts were popular at the time, the network saw fit to censor the one Abbie was wearing, with a bizarre blue smear that evoked many phone calls from angry viewers demanding to know what they were missing.

But that wasn’t all I mis-remembered: It was a duck, not a dove, that Abbie released, and it was on another talk show, hosted by David Susskind, who Abbie called “the star emissary of New York literati.” Apparently Susskind was not curious about the box Abbie was holding in his lap during the interview, a serious lapse of judgment on his part. Abbie was just waiting for his host to ask the inevitable question, “What is a hippie?” to open it, releasing a duck wearing a sign around his neck that read “I am a hippie.” Mocking Susskind’s patriarchal tone, Abbie replied, “Why don’t you ask him, David? He’s a hippie.”

Quoting from his manuscript, “Susskind exploded. ‘Catch that damn duck!’ But it was scared out of its wits. Each time staff hands tried to grab the elusive duck he crapped in midflight. Hippie-duck shit-bombs fell on the audience. ‘That duck goes!’ screamed Susskind. Stop the cameras!’ ” Like the shirt, the duck also got censored.

“The goal of this nameless art form,” Abbie explained, “part vaudeville, part insurrection, was to shatter the media’s pretense of objectivity.” Reflecting on the current crop of smirking TV pundits, I was then compelled to read the contents of both folders to find out what else I had forgotten. A lot, as it turns out, but there was a more compelling aspect to my dive into these archives. Reading about this dead but still larger-than-life historical figure, remembered for all the wrong reasons, resurrected that entire era for me, but in the perspective of the last forty-plus years–from the spirit of sixties’ social activism, when a lot of people believed that change was possible and acted on that belief, to the death of that spirit, to a long Dark Age of cynicism and apathy and disappointment over the impossibility of meaningful change, to what’s happening right now.

The next installment of the Abbie story is called “The Bust,” and it will not be funny: How in 1973, just before the Rockefeller Drug Laws went into effect, Abbie sold three pounds of cocaine to an undercover cop, and how it mirrors

the emergence of a new and drastically different spirit of the times.