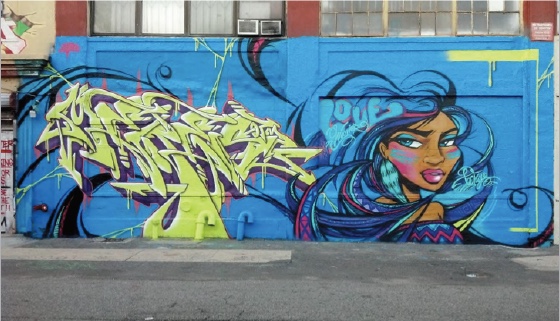 “Love Warrior and Burner” by Toofly and Meres One. One of the destroyed 5Pointz murals.

(This blog is a condensed version of an article I wrote for the March issue of WestView News, my neighborhood paper. The entire article can be read at www.westviewnews.org).

When the art world learned in February that Federal District Court Judge Frederic Block has awarded maximum damages totaling $6.75 million to 21 aerosol artists whose work had been destroyed by a developer, the response was laudatory: “This will change perceptions of an art form for generations to come.” “A milestone for street art.” The significance of this case is not limited to the amount of damages. It is also the first time the Visual Artists Rights Act of 1990 (VARA) has been litigated in a jury trial, providing case precedence for future lawsuits. The Act grants artists “moral rights” to protect works of “recognized stature,” and the right to sue for damages if they are destroyed, even if the works are owned by someone else.

“VARA is a very difficult statute to understand,” Judge Block told me in a recent interview, as its definition of recognized stature is not clear. According to Renee Vara (last name unrelated to the statute), curator, contemporary art historian, and expert witness at the trial, “Not only had VARA never gone to court, no artist or art expert had ever attempted to testify to what recognized stature is and how it should be measured.” One of the challenges she faced was that the aesthetic value of a work of art can easily get lost in translation within a court setting.

For nearly three weeks in Brooklyn Federal Court, the judge and jury listened to testimony from Vara, artists, and other art experts as they explained why hundreds of murals, which had been painted over in the middle of the night by a crew hired by the building’s owner, were not merely graffiti but examples of urban art of the highest caliber. Were they successful? The court’s ruling that 45 exhibits destroyed by the landlord met the VARA standard speaks for itself.

5Pointz, a crumbling warehouse in a once derelict Long Island City neighborhood, was where aerosol art had come of age. For decades the landlord had rented studio space to artists and gave them permission to paint wherever they pleased. By the time he had the building demolished to make room for the usual luxury towers, millions of people had viewed the murals from the elevated 7 train, millions more saw it as a backdrop in the movie Now You See Me, and the building had become world famous, a popular tourist destination. Discussing its impact in a recent interview, Judge Block said, “The art at 5Pointz is the kind of art that’s here for all people to see. It’s a vehicle to expose the public to art in a much more significant fashion and in a broader way than if it was just housed in an institution for a short time. The fact that it might not be preserved is a whole different issue, but at least the public is exposed to this extraordinary art form in ways that would not have happened if it was confined to a museum.” (To put that statement in another context, New York City museums cost $20 per person.  Street art is free for all to see.)

Quite suddenly, these beautiful, massive, breathtaking murals are everywhere, not just in New York City, part of the urban landscape, and their impermanence is a poignant aspect of the attraction. Now you see me. . . .

(Part  2 of the 5Pointz story, “Tuesday Morning Massacre,” will appear in the April issue of WestView News. A condensed version will be the subject of my  next blog.