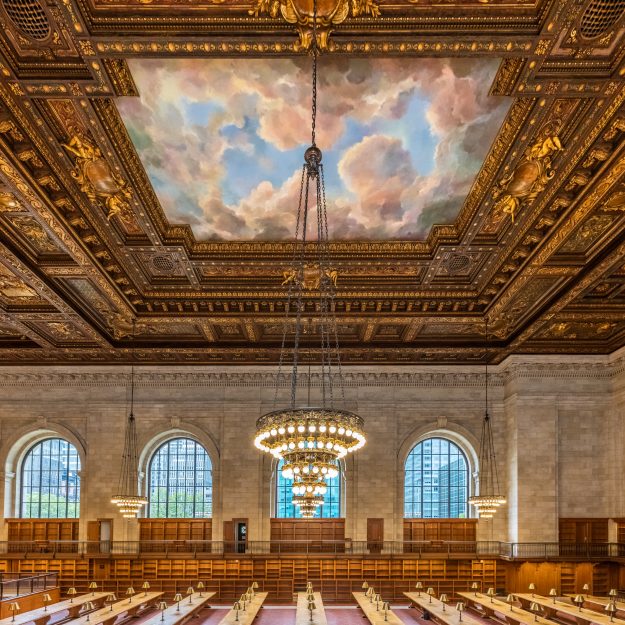 In the years before I started considering myself a writer I spent a lot of time in libraries, looking for I knew not what. The massive main branch of the Brooklyn Public Library, only a few blocks from home, was majestic in an Egyptian-temple kind of way, but the decor didn’t matter. It was the freedom to search at will for whatever it was that I was seeking. The beauty of the stacks was that in my search for the unknown I would often find a book I didn’t know existed sitting next to the book I sought, and I found that tantalizing. I also enjoyed the library’s circulation policy, a generous six volumes at a time. At night, while the children slept, and early in the morning before they woke up, I read and I wrote, copiously–comments, observations, quotes, all jumbled together in a hurried scrawl that sometimes not even I could decipher. There was a lot to catch up on, namely everything I slept through in school.

The truly arcane books, however, had to be read on site. When I gave librarians my request slips they smiled fondly, like adoption agents hearing of interest in an orphan no one ever asked for, and they’d scurry off to retrieve the items I desired. Tenderly they would lay before me books with yellowing pages that crumbled at the edges, leaving me with a lap full of confetti; books falling apart at the binding, gently held together with twine; books so precious you only could approach them by putting on white gloves and surrendering your pen.

In my search for the tantalizing unknown I suspected that the elusive information I was stalking might be hidden in a footnote, or in the spaces between the dots of ellipses, which often launched wild footnote chases back to the primary source. I had to know the full deal–what was missing–which  sometimes ended up with a need to gobble down entire books, end matter and all, in a pursuit that led me deeper and deeper into the stacks from which many a seeker of truth have yet to return.

Then I moved to Manhattan and discovered the optimum library experience, the Main Branch at Fifth Avenue and 42nd Street. There I climbed the marble stairs to Room 315, its stunning third-floor reading room, passing a mural just outside its portal that depicted a monk in a cave copying a manuscript while outside knights on horseback slaughtered each other. How appropriate, I thought. I also enjoyed the high-class amenities of that vast room–the sturdy lamps, the cathedral ceiling painted with swirling pink-and-blue clouds, the wide tables, acres of parquet, the comfy bankers’ chairs–all the while in the company of solitary people hunched over a book, possessed, scribbling away.  My tribe.

And then, one day, I began to write. Were all those years of obsessive note-taking useful? Yes. Boxes of paper categorized and neatly labeled on my bookcase shelves, handy, because I never know when some bit of information I was once passionate about needs to be revisited, by search engine now, and that, oh my, is a giant leap forward. A facsimile of an ancient document (say, “Ultima Thule” by the Venerable Bede, sixth century explorer), formerly available only in a library in Scotland (open Thursdays, by appointment), can be printed out (no more scribbling!) without leaving the comforts of home. Life is so much easier now for the literary gumshoe, and more tantalizing than ever.