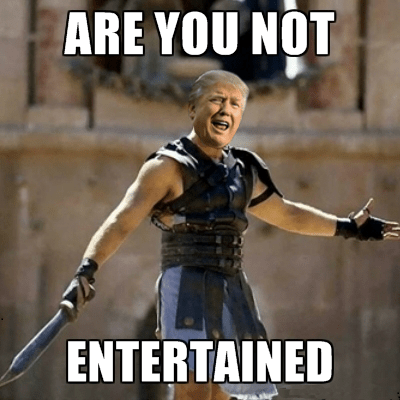 Sometimes a situation has to get really bad, I used to think, truly descend into madness, before people would wake up and do something about it. So when the pathological liar in the White House was silent for six days in the aftermath of a catastrophic hurricane and spent those six days having tantrums on TV over “disgraceful” black men kneeling in protest of systemic racism in this country (“Sons of bitches, you’re fired!”, he smirked with glee), I thought, well, now surely he’s crossed the line. Now everybody can see what a wretched asshole he really is.

But no, he wasn’t done yet. Next came his refusal to waive the Jones Act, which for nearly a century has required the citizens of Puerto Rico to pay double the price of every import. Instead of offering them help in their time of desperate need, he brought up the massive debt they owed the banks that “sadly” must be paid. Then he generously salted their wounds by congratulating himself on his “fantastic” recovery effort. Well! I thought. Finally! The mask is now most definitely off. He’s revealed to one and all that he’s the most twisted human being on the planet. The optics are horrible and that’s all he cares about, so he’s got to save face. But he didn’t.

Yesterday, Day Nine of the catastrophe, I cried when both the mayor of San Juan and Congressman Lewis Gutierrez openly wept on CNN over this humanitarian crisis where people were dying now and many more would die soon if they didn’t get help, and once again I thought, well, that’s got to be it. Rock bottom. Surely he’ll have to fake a little humanity. Even the journalists were weeping. He’ll have to at least appear to do the right thing. And did he? Oh no, he did not.

This morning, Day Ten, while I was enjoying all the comforts of modern life–food, clean water, electricity, phone, Internet, cash in my pocket, roof over my head, no raw sewage flooding into my home–I turned on CNN and read the latest tweets by this vicious, soulless, appalling Madman-in-Chief. Now he was trashing–trashing!–the mayor of San Juan for daring to criticize him, then grossly insulting three and a half million suffering people (I won’t repeat what he said here, it’s too ugly, as well as dog-whistle-racist, his specialty), and my first reaction was, well, there you have it. He’s certifiably insane. No one in his right mind would do this. But wait a minute, I told myself. That’s insulting all the people who are diagnosed with a mental illness. No. This isn’t madness. This is. This is. Evil. A word that makes me cringe but I’ll say it again. Evil. The most powerful man on the earth has descended to the lowest of the lower depths and he’s taking us with him and my heart is breaking and I will no longer hold back.

But what’s to be done? Beyond outrage, beyond grief, then what? I have no answers, only questions. My brain is not functioning. So, what does history tell us when people, masses of people, feel the same way I do–helpless and inchoate in the face of evil? (And it’s not just him; he just happens to be the spokesman with the loudest voice and largest following.) One of my favorite writers is Alan Furst, who writes novels about Europe in the years leading up to World War II. I’ve read them all, and in each book he writes about decent, caring, intelligent people who couldn’t wrap their heads around the rapid rise of fascism. First they ignored the little man with the foolish facial hair, then they insulted him, then they called him a madman, and then it  was too late.

“But Hitler wasn’t mad, he was evil,” writes Furst, “and that was a notion educated people didn’t like. It offended their sense of a rational world.” So there you have it. That’s what we’re up against, this irrational world we live in, and I don’t know what to do about it–the evil–do you? Not today, while my heart is breaking for Puerto Rico. Maybe tomorrow.