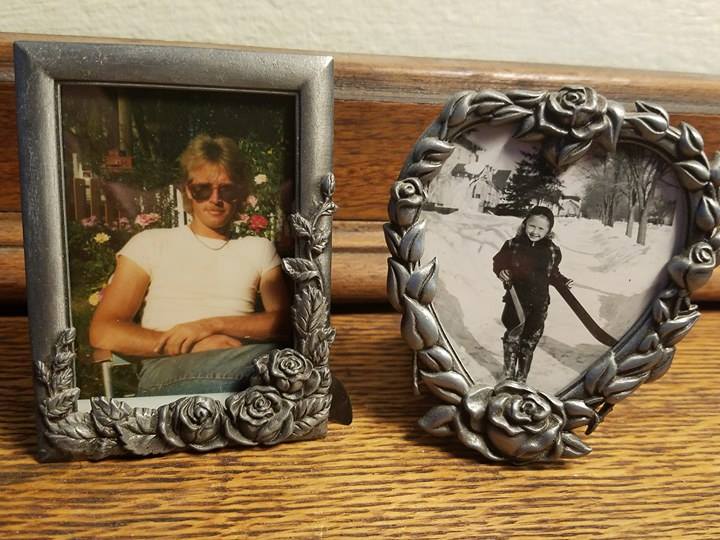 This happened a long time ago: I’m standing by the stove in the Revland family kitchen on Third Avenue South in Fargo, heating a can of cream-style corn. It’s a small kitchen, barely large enough for a family of six to sit around the table, which we do every evening. I have a feeling it’s winter, maybe because the kitchen feels warm and cozy, but I could be mistaken. What I do remember, most vividly, is stirring that corn in the saucepan with the jiggly handle and making a silent vow: “I will never forget this moment.” I’ve kept my vow for sixty, maybe seventy years, but why? What was so unforgettable about that moment? I can still see it in my mind, but I have no clues as to its significance.

The advantage of having a box of old photos sitting on an out-of-the-way shelf is that its contents can, sometimes, give a visual context to a moment of time in one’s own history. A few weeks ago I bought two small decorative frames at a thrift store, as I like to be surrounded by family photos that are significant to me and bring me joy, pulled out two of those old photos from the box, and framed them. One is of my sister Claudia as a little kid, bundled up for a North Dakota winter, smiling, adorable, and holding a pair of skis. The other is a summertime view of my brother Steve taken in his strapping twenties, Joe Cool smile, handsome as all get-out.

I e-mailed the photos to them, asking for some context. My sister had never seen hers. “Oh my gosh! Was that taken on Eleventh Avenue or on Third? And what’s the story with the skis? We never had skis.” Here is when the first-born child has something of an advantage, even if it’s only two years. I remember Eleventh Avenue. We briefly lived on that street with our mother and grandparents while our dad was in the VA hospital, recovering from World War II, fighting for his life. The photo had to be taken in the late 1940s. Dad miraculously survived (and maybe that good news is in my sister’s smile) and our parents bought the house on Third Avenue. But what about those skis? No clue. I have a photo of me taken on the same day, same background, same skis, but there’s no one alive who can give us an answer.

Steve could tell me a lot more about his photo. It was taken in the early eighties, he says. He was playing shortstop for Wimmer’s Jewelry, a state championship softball team, and he had opened his own furniture-making business a few years earlier. Claudia and I remember him as a little kid who spent most of his time wood-working in the basement–self-taught–but the art was already in his DNA. Our great-grandfather Strinden and his brother were skilled boat-builders from Trondheim.

Over the years, Steve’s furniture pieces evolved into one-of-a-kind works of art, and he’s about to open a communal multi-media gallery in the old Woolworth building, gateway to Fargo’s legendary Downtown Broadway. (People in my neck of the woods often whine, “Where have all the artists gone?” To places like Fargo, I tell them, where they enjoy the camaraderie.) Claudia went on to become Miss North Dakota of 1962, and in the seventies she was one of the early computer programmers, excited about this new thing that was totally inexplicable to me at the time. She’s still at it, keeping up with each new and maddening point-oh, and still beautiful.

All three of us play a mean guitar. Although we couldn’t be more separated geographically, I greet them each day as I pass by the bookcase that their photos adorn, grateful for being able to collaborate with them in reconstructing little bits of our shared history. Memory sticks.