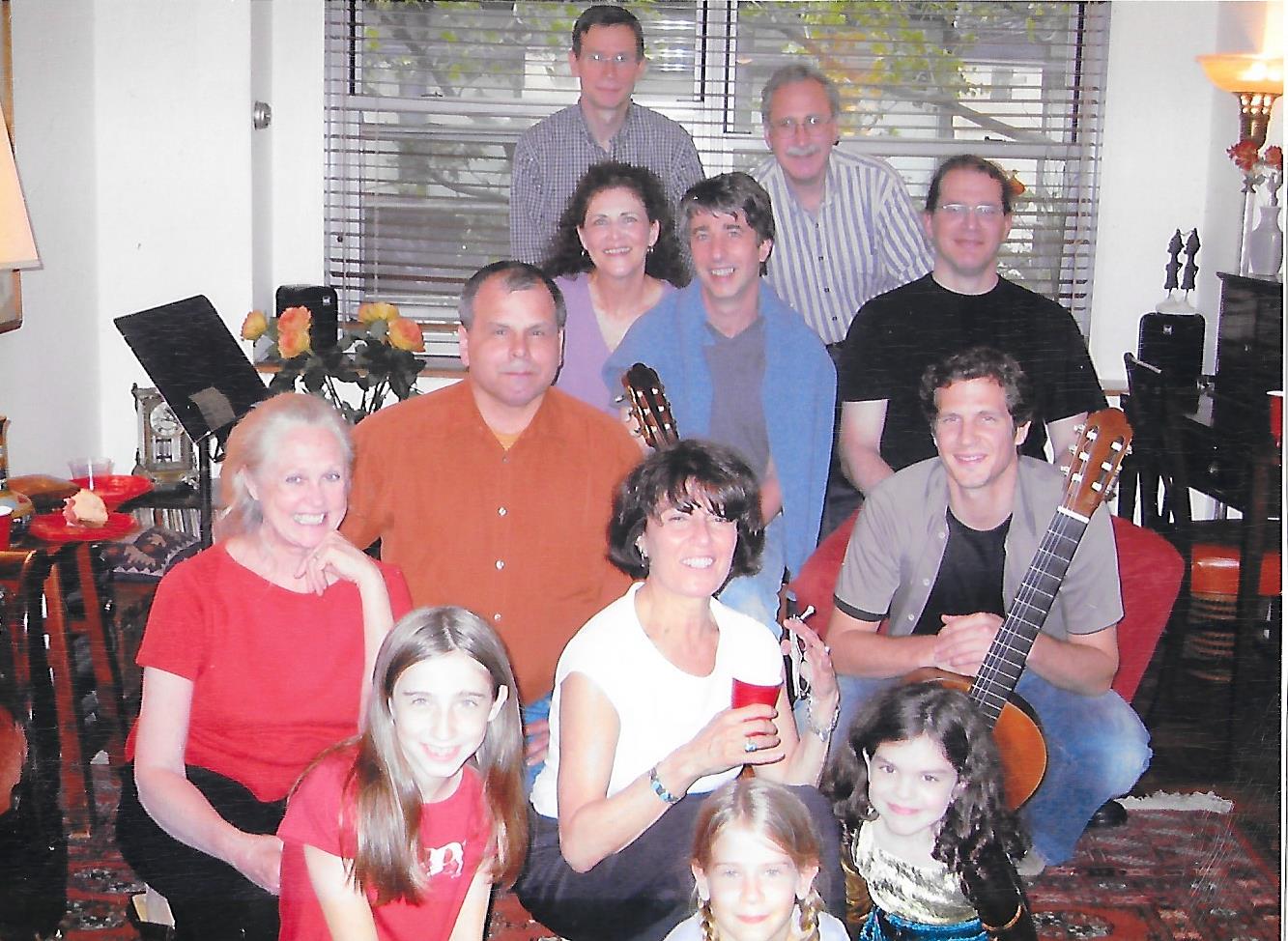 I had the pleasure of hearing Andres Segovia perform in 1977, when he was 84 years old. Although I was sitting toward the back of the concert hall, I heard every note he played. How does he do that, I thought, this little old man? Not by playing loud, I have learned. The acoustic guitar is a quiet instrument by nature, and banging away at it may increase volume but the sound won’t be musical, just loud. Segovia developed a new technique that employed plucking the strings with the fingernails as well as the fingertips, which increases volume while producing those rich, warm, sonorous tones I love so much. For myself, achieving volume as well as beauty of tone–without force–has been one of many contrary aspects of learning to play the classical guitar.

When I started taking lessons from Helen Bates (see the smiling woman in white, surrounded by her students) I  spent years unlearning a lifetime of bad habits–left-hand fingers that fling themselves off the strings, hysterically lost in space (still a problem); right-hand fingers so rigid they chase the music away.  It’s only recently that I’ve learned how to play fast. How? By practicing slow. With soft fingers. Another dichotomy.

When tension invades the body the muse departs, which brings me to another classical guitar conundrum–performance anxiety. Legend has it that Julian Bream always wore red socks to ward off the terror of playing before an audience. Why is performing the guitar so scary, even for the best of players? I started taking piano lessons at the age of eight and never feared recitals, just marched up to the piano like a little soldier, played my piece, and sat down. Maybe the difference is that pianists sit behind a veritable fortress of an instrument, in profile to an audience they can choose to ignore, but the guitarist sits full-face before them, embracing an instrument that is pressed close to the heart. I feel vulnerable even as I write this.

But what is the point of a lifetime of practicing music if it’s not shared? For decades now, Helen has put on yearly recitals, crowded but cozy affairs in her West Village apartment, and encourages her students to take part in performance classes she holds prior to each recital. Thorough knowledge of a piece is essential but it’s not enough, she says, and the only way to overcome performance anxiety is by–oh no–performing. At these classes we discover the trouble spots, find out how our pieces can be improved, and most important of all, learn to get over ourselves and let the music in. Then, when the fateful day arrives, Segovia’s comment about performing is my guide: “I have to be present at every note I play.”

It’s been thirty years this month since the death of the man who elevated the acoustic guitar to respectable “high art,” and there’s been some revisionist thinking of late about his place in musical history. One famous former student complained that the master was too conservative, snobbish about some South American composers who weren’t “classical enough” for him, but others vehemently disagree, pointing out his many efforts to promote their music. One defender brings up a Star Trek episode in which Data plays poker with Isaac Newton, Steven Hawking, and Albert Einstein. Hawking tells a joke about relativity using jargon that is unfamiliar to Newton, and he doesn’t get the punchline. “Don’t patronize me, sirs,” he says. “I invented physics.” Such is the homage I would like to pay to the inventor of the classical guitar. As he said, every note matters. I feel the same way about words.