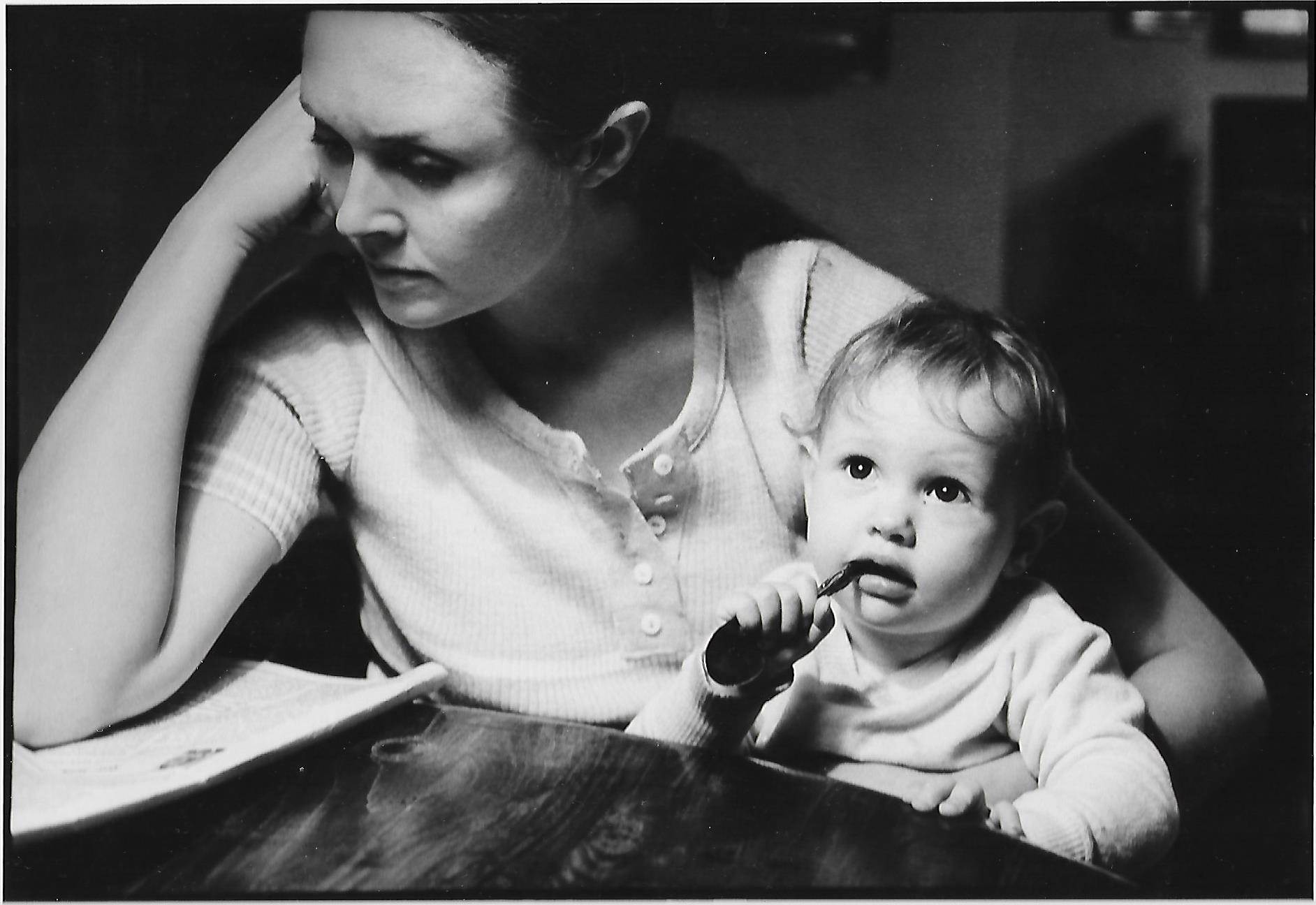 This is not a manifesto. I’m hardly qualified to instruct others on how to cope with living in nightmare times when I struggle each day with a disorder my son-in-law Simon calls “infobesity,” or obsessive consumption of the news. The current situation reminds me of horror stories from another era–Kissinger’s Christmas bombings, the CIA-sponsored coup in Chile, Nixon’s lie about a secret plan to end the Vietnam War. In the photo I’m reading Pete Hamill’s column in Dorothy Schiff’s New York Post (the polar opposite of what that paper is today), with baby Carrie on my lap, dreaming her own dreams. Throughout the Nixon/Kissinger years, Hamill, a journalist with a passion for justice and a knack for delivering the truth with a knockout punch, gave me a daily reprieve from despair, provided words to express my outrage, and satisfied my hunger for evidence-based news.

My state of mind today is pretty much the same–stuttering, bilious, incoherent outrage–but the difference between then and now is the 24-hour news cycle. One would think that networks like CNN and MSNBC, having unlimited amounts of time to keep us well informed, would be valuable sources for news hounds like me. Not so, for a simple reason–lack of trust. Do they report the truth or fact-free corporate propaganda? I have no idea, only a strong suspicion that it’s the latter. An example: For ten months I’ve been listening to panels of experts howling at each other about whether Russia is meddling in our elections (Oh the irony. Remember Pinochet?) and they’re still looking for that smoking gun. I recently heard one of them say, “We may never know the truth.” Really? So what is this story about? Frothing neo-McCarthyism? Yellow cake rerun? The First Family doing real estate deals with Ruskie oligarchs? Or perhaps it is another weapon of mass distraction–Look over here! The president’s tweeting again!–while he gleefully bludgeons the 99 percent with the immense powers of his office.

To preserve my sanity I have a new strategy: I rely on cable networks only for their “breaking news,” and as soon as the story is repeated, I click off and have a life. I believe that’s called portion control, and so far, so good.

I’ve found other ways to cope as my beloved country goes down the tubes. One of them, I am not ashamed to say, is collecting nicknames for the grotesque, semi-literate bully-boy in the White House: Cheeto Mussolini, Captain Queeg, Emperor of Swine, Clockwork Orangutan, Our Caligula, Chief Slap-in-the-Face, BLOATUS–I could go on, but to be honest, the instant high I get from these insults is soon replaced with a dose of spiritual acid reflux. Fortunately, there are other alternatives:

History Instructs. On Tyranny by Timothy Snyder has been on the New York Times best-seller list for weeks, so I guess I’m not alone in my fears. “What’s happening now is not new,” he writes, citing the rise of fascism in 1933 as a lesson in the dangers of “let’s wait and see,” and emphasizing the importance of defying the tyrant early on when “we have more power. Don’t obey in advance.”

“The Artist as Prophet.” Chris Hedges delivers a compelling message in this internet piece. “All despotisms, including our own, make war on culture. . . .In times of stress it is not a luxury but a life raft.” http://www.truthdig.com/report/item/the_artist_as_prophet_20170528

Eye Openers. In another TruthDig piece, Tom Englehardt writes that he is actually grateful for President Trump, “the monster of our own creation. He is teaching us just how deeply disturbed our American world actually is, an empire gone astray.” http://www.truthdig.com/report/item/little_big_man_20170530

Music. Yesterday I clicked on a Facebook link and heard Sheka Hakkeh-Mason, a seventeen-year-old cellist, playing an orchestral version of “Hallelujah” http://www.cmuse.org/leonard-cohen-hallelujah-chamber/. And then I played it again. Some days, when my malaise is too deep for words, I can get instantly transported this way, tears and all.