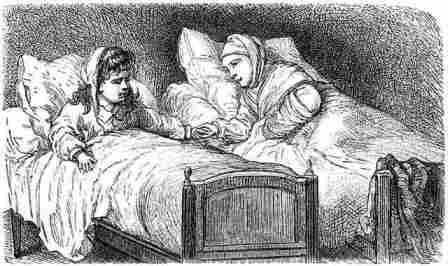 I used to wake up in the middle of the night and stress myself out trying to get back to sleep, but no amount of thrashing around and pillow-punching, not even a double dose of melatonin, got me there. Instead I would silently scream, Why can’t I sleep through the night like a normal person? To my great relief, I have found out that it’s sleeping through the night that’s not normal. Waking up around three in the morning is. Scientific sleep studies have shown that, once people are no longer sleep-deprived, they wake up around three in the morning of their own accord. In fact, before the industrial age and the invention of artificial light, that natural tendency was incorporated into how people spent their lives between night and morning. In literature from Chaucer to Thackeray this nocturnal custom even has a name–first and second sleep.

Before the 19th century people blew out the candles as soon as it got dark and went to bed. Then, around 2:30 or 3:00 a.m. they woke up, lit the candles, had conversations, read, prayed or meditated, made love, or even went out to visit the neighbors because they were up, too. Having two sleeps was the norm before the era of the electric lights, and in between was this calm and pleasant interlude, work-free, stress-free–playtime for adults.  Then, when they felt tired, they went back to bed for their second sleep, waking up a few hours later not to an alarm (what a horrid way to start a day) but gently, to the morning sunlight.

Needless to say, this nice custom ended with the industrial age and the world of nine-to-five. Fortunately, I’m a freelancer, so I have the luxury of a two-sleep night if I’m so inclined. Now, when I wake up in the middle night and can’t get back to sleep I no longer berate myself.  Instead, I roll out of bed, make some ginger tea, do a little reading, maybe play some quiet classical guitar–whatever gives me pleasure. This interlude is also a good time to meditate. According to Tibetan Buddhists, during the predawn hours the veil between the realms of the physical and the unseen is the thinnest, easing that passage back and forth.

That’s another interesting option, but sometimes I just like to stare out the window at all the Manhattan towers with their lights turned off, a scene that looks like a black-and-white Edward Steichen photo.  Then, when I’ve had enough of doing whatever appeals to me, or perhaps nothing at all, I crawl back into bed for that luxurious second sleep. Just doing what comes naturally.