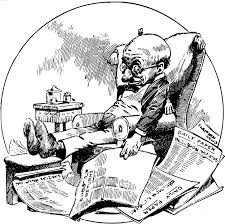 Image Credit: Sleeping Man With Newspapers from Vector.me (by j4p4n)

On a recent trip to Italy I got into political discussions (an old habit) with locals and tourists from all over the world. When people found out where I was from, they often responded with alarm over the current election cycle. How could this be happening? they wanted to know. Two front-runners with the lowest approval ratings in history? A choice between a pro-fracking warmonger and a vulgar barbarian to become the most powerful person in the world?  I couldn’t offer a defense because I basically share their feelings, but I did tell them that I supported Bernie Sanders. “Never heard of him,” they said. This didn’t surprise me, seeing as how their main source for news about American politics is CNN.

The parent company of CNN is Time Warner, which may explain why every time I log into my e-mail account there’s a full-screen image of Hillary Clinton in my face, but it’s not just Time Warner that’s in the bag for the establishment candidates. All the giant media outlets are now owned by giant multinational corporations, and after five months of 24/7 primary coverage it’s now obvious to anyone who is even remotely paying attention that the mass media are gung ho for preserving the status quo.

Clearly, the Fourth Estate is no longer the “people’s watchdog,” mandated to serve the public by providing the news that officials in the three branches of our government don’t want us to know. Instead, the mainstream news outlets, especially the broadcast media, are in the business of making piles of money. According to Lee Fang, an investigative journalist for The Intercept, most of the $45 billion in campaign contributions amassed this year will be spent on television ads. This explains why CEOs don’t give airtime to candidates who call for big changes in the status quo, like campaign finance reform, and why I no longer have the stomach for watching any news programs on TV (especially MSNBC, once my favorite go-to source for information).

When President Eisenhower gave his farewell address more than fifty years ago, he warned the nation about the rise of the military-industrial complex. Now we are faced with an even greater threat to our democracy–the military/industrial/media complex–and that’s truly disturbing. Along with the bad news, however, there is the usual silver lining. A new “people’s watchdog,” electronic journalism, is filling the information gap. When I need to find out what’s really happening in this world I go to my search engine and start clicking. By linking to other Web sites listed in these news stories I can get a pretty clear picture of what the mass media are working hard to conceal. Here are some electronic news sources I often turn to: Democracy Now, The Nation, The Guardian, Mother Jones, The Intercept, Investors Business Daily, Truthdig, Truthout, Common Dreams, Counterpunch, Global Witness, and Alternet. There are plenty more. Let’s face it; all journalists have a bias, because we’re human, but a lot of evidence-based news is out there on the Internet, and it’s becoming the new Fourth Estate.