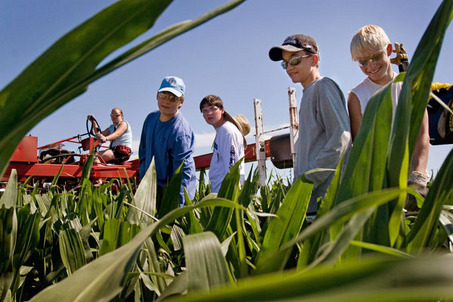 Like many teenagers in the Midwest, my first job was corn detasseling. Shortly after dawn we were bused to nearby fields to pull out the tassels in the “female” rows of corn that would then be pollinated by tassels in the rows of “male” corn. It was hard work, and the pay was 25 cents an hour. Detasseling is a recent form of breeding corn plants by hand that began in Central America 7,000 years ago, when farmers began domesticating wild corn into maize through the slow process of seed selection. By the time the pilgrims arrived, many generations of these farmers had increased the size of corn cobs ten-fold. A grateful Governor Bradford praised “God’s good providence that we found this corn, for else we know not how we should have done.” [italics mine]

Detasseling by hand still occurs in this age of mechanized farming, but the real money is in a relatively new kind of plant breeding called GMOs, or genetically modified organisms. Although GMO advocates argue that plants have been genetically modified since time began, there is nothing natural about artificially manipulating living organisms by adding pesticides and herbicides to their DNA. Although the biotech industry advertises that GMOs are beneficial, the only proof for that claim comes from studies financed by the biotech industry.

To help farmers and consumers make more informed choices, the group Earth Open Source has published a 120-page pamphlet, GMO Myths and Truths. It includes data from 280 peer-reviewed scientific papers, and it can be downloaded for free on its Web site. Here are a few disturbing findings:

–Nearly all GMOs are engineered for resistance to herbicides and pesticides, but since they have been marketed the use of these poisons has increased 15-fold. Instead of making GMOs more resistant, they require even more chemicals to thrive.

–The emerging “super bugs” and “super weeds,” impervious to most pesticides and herbicides, can only be killed by chemical components found in Agent Orange.

–Biotech companies like Monsanto are winning lawsuits against family farmers for patent violations after finding genetically modified seed in their fields, even if it has blown in from a neighbor’s field. When they lose, the farmers pay Monsanto’s team of lawyers.

Maybe it’s time to heed the lesson of Dr. Frankenstein: messing around with nature can have some pretty scary consequences. (More about GMOs next week.)